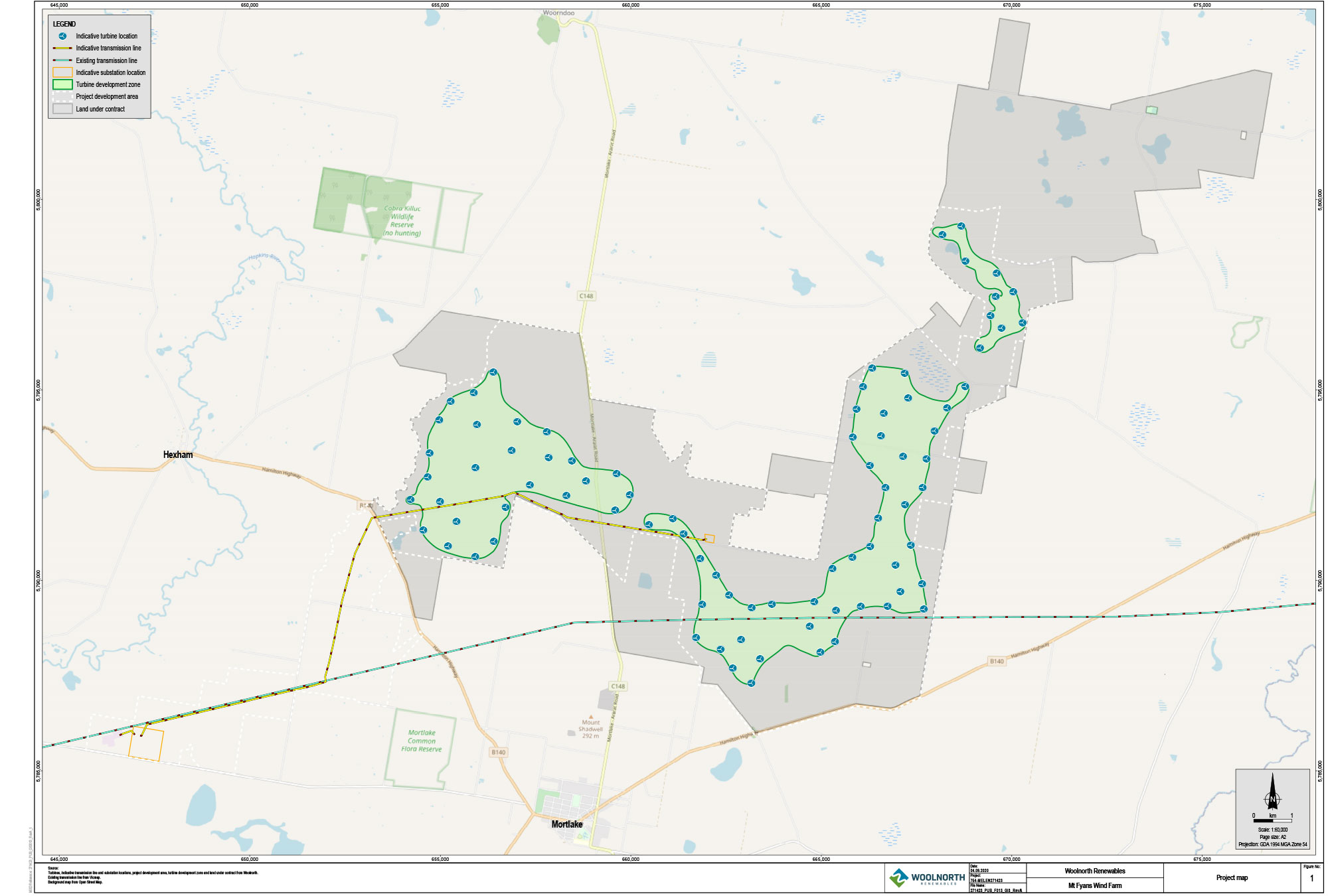 Roaring 40s undertook wind monitoring about five kilometres north of Mortlake and identified properties with a strong wind resource, ultimately leading to a proposal of a wind farm with up to 84 turbines across 13,600 hectares. The site lies to the north of Mortlake, with the Mortlake-Ararat Road running through the centre of the farm and the Hamilton Highway forming part of its southern boundary.

Hydro Tasmania, which has a long and distinguished history in renewable energy development and operation, began working on the project in 2011. In 2016 Woolnorth Wind Farms (now Woolnorth Renewables) combined with Hydro Tasmania to work together on the project. After the completion of multiple environmental and heritage surveys a planning permit application was submitted in late 2018. The proposal incorporates 18 kilometres of overhead powerline which will connect the project to the Mortlake substation, adjacent to the Origin gas power plant. In response to community concerns the project will not involve construction of a new transmission line, instead the project will share existing power poles with another project.

Due to the intense growth in the industry in recent years, the government has requested further technical and flora and fauna information regarding the project. Hydro Tasmania and Woolnorth Renewables are working closely with the government to supply this additional information. Woolnorth Renewables is now taking the lead on the project and expects to hear an outcome on the planning application by mid 2022.

The proposal incorporates 18 kilometres of overhead powerline which will connect the project to the Mortlake substation, adjacent to the Origin gas power plant. In response to community concerns the project will not involve construction of a new transmission line, instead the project will share existing power poles with another project.

Woolnorth Renewables (formerly Woolnorth Wind Farms) has been operating since 2011 and owns and operates three wind farms in Tasmania.

We are owned by China Energy and Hydro Tasmania and are based in Tasmania, where we operate the Bluff Point, Studland Bay and Musselroe wind farms. These projects generate almost 10 per cent of Tasmania’s electricity needs and directly employ more than 40 people.

We have a long history of developing and operating wind farms and many of our staff on the ground today have been involved in the company’s three operating projects since their inception.

We are committed to sustainable practice, protecting the environment and proactively supporting and informing the community. In Tasmania we host school and other group tours of our projects, as well as supporting community events such as the Rail Trail Run and Ride, Tassie Scallop Fiesta, the Where, Where Wedgie field surveys, Pony Club Tasmania State Trials and more. We also invest in a University of Tasmania scholarship program to support young people from financially disadvantaged backgrounds obtain a secondary and tertiary education – contributing more than $200,000 since 2013.